WhatsApp betas let us see the latest developments in which the application works. Already prepare surveysthe possibility hide online status and now, according to information from WaBetaInfo, voice states are being worked on. Just like it sounds.

We currently have the status option in WhatsApp, a concept inherited from Instagram stories. Content that self-destructs after 24 hours and with a very short duration. We already know what the voice states will look like. They are just as you imagine.

This will be the voice states 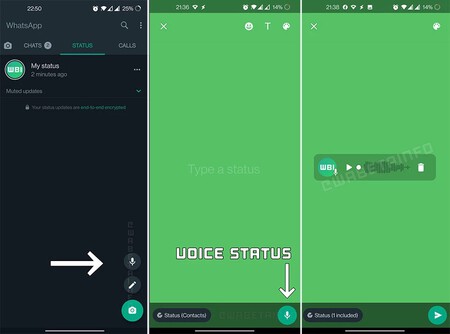 Thus, it is added to the existing options of uploading states with photos, videos or texts. At least in this first beta version, the interface is not too elaborate. Voice recording appears in the middle of the screenalthough we understand that this element can be moved at the user’s will.

It is also conceivable that we can combine these voice states with the existing ones, to upload text or a photo next to the recordings. these messages will play when opened automatically, and the maximum length will be 30 seconds.

At the moment, this feature is in beta, but it shouldn’t take too long to make it to stable releases. As usual, if we upload a voice status, the corresponding ring will be marked on our profile, indicating that we have content in the status.