President Macron’s language was offensive in its clarity. He rescued a phrase from his predecessor De Gaulle to compare those leaders like the crazy “Pyrenean goats” the German Scholz and the Spanish Sánchez who are obstinate in resurrecting a project buried three years ago as ruinous: the continuation of the gas pipeline known as MidCat because it would unite Catalonia with the French Midi region. Scholz lamented that the Midcat had not been finished in order to be able to receive gas from Spain via France now that Berlin is left without the Russian supply that accounted for 55% of its imports. Macron’s resounding ‘non’ is not a perfidious French stab at an initiative that Sánchez had caught on the fly to present Spain as a great European gas reserve, Brussels has also been profiled and the experts consulted by NIUS agree that MidCat is not very viable, not even in its shortened version of 450 million euros compared to the 3,100 million of the original project.

The current connection is underused

in 2019 regulators in France and Germany opposed MidCat because there was no demand from the gas marketers, because the existing connection was hardly used and because the investment was high. “This is a ruinous project that makes no sense,” said the Minister of Ecological Transition at the time, Theresa Rivera in Congress when commenting on the refusal of the regulators.

“What Macron says is true,” he says. Jesús M. Valdaliso, Professor of History and Economic Institutions of the Basque Country. “The interconnection that we already have was hardly used until now. When the regulators saw the data and what had to be invested, they concluded that the MidCat had no justification”.

“The average historical use of the two gas pipelines, the one from the Basque Country and the one from Navarra, has been 53%”, says Julio Balana, expert in energy markets of the General Council of Industrial Engineers. “It began to export more with the warbecause reserves had to be increased, but, for example, in August what Spain has done is import gas from France”. 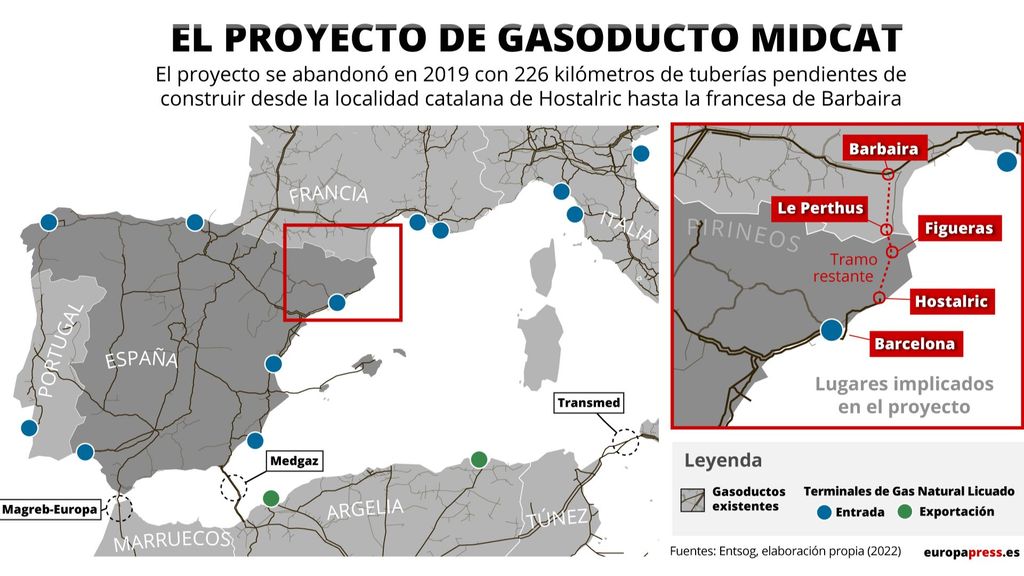 France should invest in its gas network

“France is a country with a fairly weak gas network,” he points out Jacinto Lobo, director of Barbo Renovables and the Kutxabank Energy Circle. It only has a direct gas pipeline to Germany, the rest are indirect connections via Belgium, Switzerland or Italy. “They are the most saturated gas pipelines. The one from Belgium to Germany has been at 90% occupancy in August and those passing through Switzerland and Italy at 80%”, says Julio Balana. It would not be worth much to send more to France if this country does not have the capacity to pump it to the center of Europe. They are the bottlenecks to send the gas to the center of Europe, where the large consumers are. “France should invest billions to bring all that gas to the center of Europe,” adds Balana.

It goes against European objectives

Europe has set itself the goal of zero emissions in 2050. A drastic reduction in emissions from fossil fuels such as coal, oil and also gas. “It does not make much sense to make new investments in fuels that have to disappear by 2050”, argues Jacinto Lobo. “Those big investments will take 30 years to pay back, because building permits will take another five or 10 years. You would not have that viability of the gas pipeline until 2030 and you would have 20 years left to make it profitable”. Even so, Lobo stresses that gas will continue to be key in the energy transition because it works as reserve energy for the electricity system when there is not enough electricity generation from a renewable source. The Green Hydrogen Argument: An Entelechy

Sánchez cites green hydrogen to justify now a work that until recently did not arouse enthusiasm in his Government: investing in a new gas tube would be justified because in the future it would serve to transport green hydrogen, a non-polluting fuel that is generated from electricity from renewable ones. Macron has been skeptical.

“It is an entelechy. Through the gas network you can only put 12% green hydrogen without making reinforcements right now. It is a very self-igniting gas. It cannot be burned in a gas turbine. It makes sense to produce it where you are going to consume it and use it in the chemical industry, on ships or on non-electrified railways,” says Jacinto Lobo.

“A tube could be designed specifically to transport hydrogen, it is not a technical problem. What happens is that it is more efficient to export the electricity generated with green hydrogen than to export the gas”, says Julio Balana. Jacinto Lobo also insists that the priority is to improve the electrical interconnection with France, which is currently very low: “With France we only exchange 3% of the electricity sold in Spain”.

Spain has six plants that receive liquefied natural gas (LNG) from methane tankers and convert it back into gas. Spanish LNG plants account for a third of all regasification capacity in Europe. Germany did not have any to date and relied exclusively on what came through the pipeline. The Spanish Government exhibits its LNG plants as a European reservebut what can they contribute to the rest of the continent if there are no big tubes to send it.

Experts believe that it is more feasible for Germany and other countries to build their LNG plants – the Germans are already doing so – than to embark on the always problematic construction of a gas pipeline that needs the approval of third countries. “A regasification plant is undoubtedly much cheaper than building the MidCat gas pipeline. They are more manageable and easier investments to make because they only depend on you, not on other countries like the gas pipelines”, explains Valdaliso. 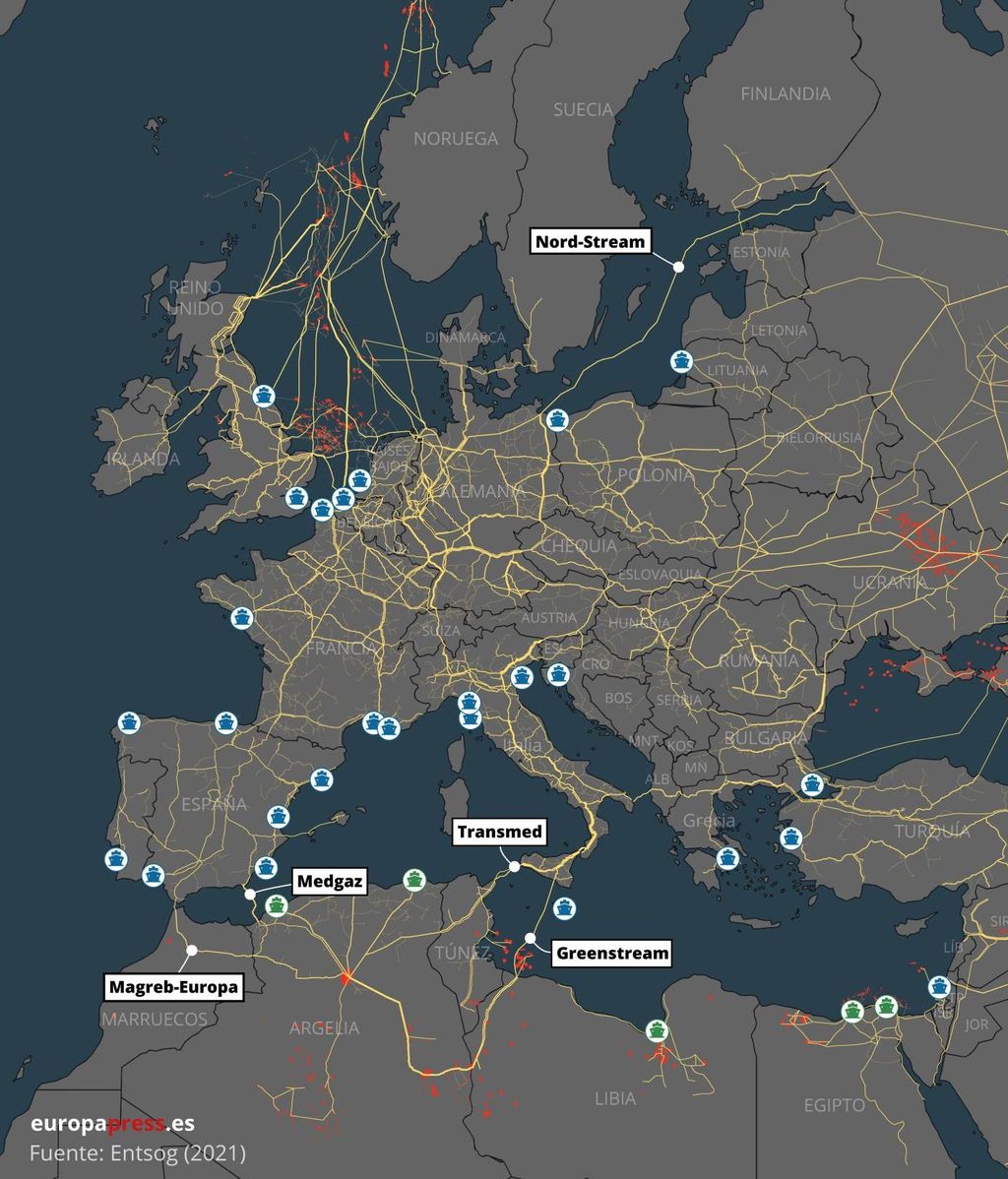 The gas network in Europe.Europe Press

For decades, France has made a strong commitment to atomic energy. Paris wants to make its nuclear investments profitable. “France is not interested in creating a gas path from Spain to Germany so that they can burn it there and produce their own electricity. He is interested in producing his electricity and selling it to Germany”, says Julio Balana.

And a gas pipeline with Italy?

As an alternative to MidCat, there has been talk of building a gas pipeline under the sea from Barcelona to Livorno that connects there with the Italian and European network. The experts consulted by NIUS also do not see the point. “It would be to send Algerian gas, because to send them our LNG it is better for them to build an LNG plant in Italy,” says Jesús M. Valdaliso. “Another entelechy”, comments Jacinto Lobo. “Italy already has two important connections with Algeria.” “It would be much more expensive than the MidCat, there are 700 kilometers of underwater gas pipeline. It is cheaper to build LNG plants”, points out Julio Balana.