Pablo Delgadomanaging partner and CEO for America lookconsiders that “the inventory parity and rates is a nineties concept of which the OTA they continue to take advantage. It is time for the hotelier to redefine a relationship with them with a new strategy that allows you to grow your direct channel, reduce your dependency and earn more money”.

Hoteliers, although unfortunately not all, have been applying in their direct channel the same strategies of the OTAs in loyalty and mobile discountsbut always in inferior conditions before its powerful programs of loyalty –Expedia Rewards (now One Keyby bringing together all the Group’s programs) and Booking Genius-, that in the metasearch engines they show the exclusive rates for their members, even for those who are not yet, along with the standard rates of the direct channel.

As for the mobile reservationsin the case of booking.com Already represented 66% of the total in the first quarter of this year, a percentage that in the direct channel it ranges between 30% and 45% at Mirai client hotels, depending on the destination.

This supposes, in the words of Delgado, that “mobile share is 17% higher in OTAsa difference that makes all the sense in the world given that it is the most used device at the top of the funnelwhere OTAs are used more for the inspiration and search processes, while the direct channel competes more in the middle and bottom of the funnel”.

“This unequal mobile quota means that 25% of users are seeing the “standard desktop” rate on their website but the “special mobile rate” on the OTA”, according to the CEO of Mirai for America.

However, as Delgado has recognized, it is “the mobile app the one that makes the difference”. Proof of this is that on Booking.com it channels 40% of all its reservations. “This is a huge figure that reveals the crucial importance of the app in the long-term strategy of OTAs. Only large hotel chains can have mobile applications that have an impact”.

In the case of independent hotels or small chains“many try but fail to attract users and members to the app. Within the mobile applications a new world of rates can be displayed. Of course, discounted rates apply on mobile, but the possibilities for OTAs are endless, especially on the model merchantthe traditional Expedia and to which at a good pace is migrating booking”.

The good news: two solutions to be able to compete… although with pros and cons

The first approach, as Pablo Delgado has highlighted, “is also the simplest: withdraw all programs and promotions that imply a discount on OTAs, also known as “discovery enhancers”. I mean Rewards, Genius, mobile discounts, free upgrades…”

It would also be ideal, as he added, “avoid model OTAs merchant, as the hotelier cannot prevent disparities from appearing in many unseen places. Once he gets it, he should implement the same discount strategies for loyal customers and mobile reservations, etc., on your own website. This will ensure that the hotel website always be the most competitive channel for the end customer”.

The second approach, as the Mirai manager underlined, “is totally different but equally effective. Consists in keep all “visibility enhancers” (loyalty programs, discounts for mobile reservations, etc.) in the OTAs but applying a higher initial price at the channel manager levelwhich will ensure that the hotel website is the most competitive channel, even after applying all discounts. The price that appears in the direct channel will always be the best alternative”. 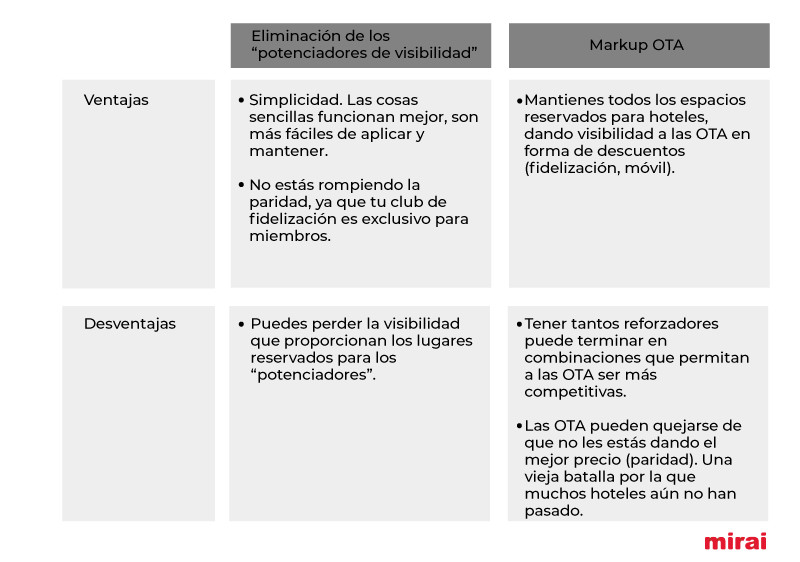 Advantages and disadvantages of both models according to Pablo Delgado. (Click to enlarge the image).

Either of the two options, according to Delgado, “It will make the direct channel the most competitive in all areas”. But “it would be naïve to think that it can be done without decrease sales through OTAs, since the more the hotelier sells directly, the less he will sell indirectly. Consequently, the hotel will be less interesting for OTAs and will inevitably will end up losing visibility”.

More information on how the market is distributed in:

– Chains and independent hotels: the weight of each sales channel

– Booking and Expedia maintain their domain in the European Union

– How hotels can compete with the new Booking

– Keys to minimize the three barriers of direct sales

– How much technology does a hotel need?

However, as the expert has recommended, “you should not be scared, it is the obvious consequence. The hotelier will be better prepared, with more loyal repeat guests and a customer database to work with. In addition, OTAs have substantially changed the way of manage your rankings. All established concepts of how visibility works are no longer valid.” Therefore, both approaches “have different advantages and disadvantages”.