On a lonely street, someone walks. He is followed by two subjects with the attitude of those who think they own everything, they are a kind of policeman, but tonight, in this corner of the city, they are both criminals. The target defends, but the force used is too much and the attackers are killed. The victim who is now guilty flees while, somewhere, spaceships and robots operate as if nothing had happened.

LOOK: The best thing about “Star Wars: Obi-Wan Kenobi” is that it’s over [CRÍTICA]

If not for the mention of science fiction, the above paragraph could have described a mystery movie. But it is “Star Wars: Andor”, a series that moves away from lightsabers to show the common person, at first oblivious to the actions of the Empire that killed almost all the Jedi. Unthinkable ten years before, this is just a short-term sign of the franchise’s path: series where the Skywalker surname is not at the center, where different corners of a galaxy that is fictional, but so rich in details and characters are explored. only on jedis and siths would it be a waste.

In 2016, “Rogue One: A Star Wars Story” hit theaters, the first live-action spin-off of the saga that shows an unequal group of rebels join forces to steal the plans for the Death Star, a weapon of the Empire. It has the power to destroy planets. The mission is dangerous and all the heroes die, but not before succeeding. The fruits of sacrifice are seen in “Star Wars: A New Hope” (1977).

One of these martyrs is Cassian Andor, a practical man who has done questionable things, always with the goal of liberating the galaxy. Played by the Mexican Diego Luna, Andor returns with his own series, set before his inevitable sacrifice and that shows how a rebel is forged from the heart of the oppressed people. The cast is completed by actors such as Genevieve O’Reilly, Adria Arjona and Stellan Skarsgård.

In its films, “Star Wars” has focused on conflict, as the Empire against the Rebels, the bad guys against the good guys, guarantees drama and action. But this saga has kept the public away from the day-to-day life of the galaxy. How does a dictatorship affect the lives of normal people? In its first episodes, to which this newspaper had access, “Andor” is presented as the most different series of this saga so far, where politics receives unprecedented weight in a universe marked, rather, by action and mysticism.

There is the character Syril Karn, a low-level security officer who, barely given a little power, tries to do what he thinks is right. His decision, small in appearance, brings consequences. “When he was developing the character, he saw what motivated him, and the things that governed him were all traumatic,” the actor who plays him, Kyle Soller, told El Comercio. “When people have unresolved issues that they then turn on others, they become extremely dangerous. I always feel that with a villain you have to understand why he makes these decisions, where they come from, because light and shadow exist within each person, ”he maintained.

For her part, the actress Denise Gough, who plays the analyst Dedra Meero, a bureaucrat at the top of the Empire; she emphasizes how distinct this series is. “Even Cassian Andor does things that would not fit the description of a hero. So you have people in positions that are considered villainous, doing things that, maybe, are not always considered villainous,” she said. 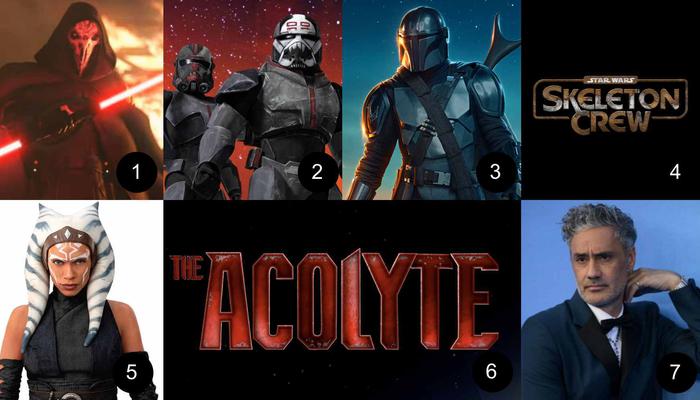 journey into the unknown

Beyond the comics and novels, which do not necessarily coincide with the official chronology, “Star Wars” has had three film trilogies: the original (1977-1983), the prequel (1999-2005) and the sequel (2015-2019). ). During this last stage, the first live-action series of the franchise also appeared, “The Mandalorian”, acclaimed by critics and audience alike and which will return in 2023 with its third season. Meanwhile, on film, things didn’t necessarily go well with the final trilogy.

After the US$2 billion raised by “The Force Awakens” (2015) by director JJ Abrams, the second film, “The Last Jedi” (2017), only raised US$1.3 billion. Directed by Rian Johnson, the film sparked discussions when a toxic group of fans complained online with sexist and racist arguments, attacks directed at actress of Vietnamese origin Kelly Marie Tran; and partly conservative, in opposition to the treatment of Luke Skywalker, who is going through a “crisis of faith.” The third installment, “The Rise of Skywalker” (2019), featured Abrams again and was a return to the origins with creative decisions that were at least questionable. And the collection? Less silver, US$ 1,074 million.

Since then a lot has happened: An additional trilogy has been cancelled, another trilogy, from the despised Rian Johnson, would be on the line. Although there will be movies in the future, at the moment the focus is TV (see box for more details). As the head of Lucasfilm, Kathleen Kennedy, told Vanity Fair, this corresponds to the origins of the saga: it was always a serial narrative, hence its passage to Disney + has been organic. “Andor” is another step in this new era, but it may not be the definitive one. In the end, it depends on the response of the public and if this series, and the ones to come, have enough “force”.

The first three episodes of “Andor” arrive on Wednesday, September 21 on the Disney + platform.

The series will have a total of 12 episodes.